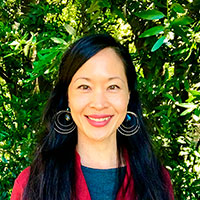 Tamara Ja is a Nationally and California licensed Acupuncturist, Herbalist and Traditional Chinese Medicine Practitioner. She is also a Reiki Master and certified massage therapist specializing in Tui Na medical massage. She received her Masters in Science from the American College of Traditional Chinese Medicine (ACTCM) in San Francisco. During her schooling, she interned with pulse master Bob Levine, L.Ac. in Berkeley and had a private Tui Na massage practice at ACTCM. She has worked at the Stroke and Rehabilitation Center at the California Pacific Medical Center, the ACTCM Ear Clinic and the Haight Ashbury Free Medical Clinic.

Before her training in TCM, she worked for the University of California, San Francisco at the Tuberculosis Clinic in San Francisco General Hospital. She has a degree in Modern Literary Studies (with emphasis in Critical Theory, Philosophy, Semiotics, Psychoanalytic and Literary Theory) from the University of California, Santa Cruz where she graduated with Highest Honors in the major and College Honors.

She studied Daoism, Confucianism, Buddhism, Chinese Medicine and Nutrition, as well as the Chinese Mantic Arts (including: Chinese Astrology, Feng Shui, Yi Jing divination, Qi Gong, Meditation and much more) with Liu Ming of Da Yuan Circle until his passing in 2015.

Tamara has been a practitioner of Traditional Amazonian Shamanism for over fifteen years, having apprenticed extensively in the Indigenous Shipibo-Conibo lineage, as well as the Quechua-Lamista tradition. She is the founder of Ani Bima Circle, a non-profit tax-exempt 501(c)(3) Church and spiritual community dedicated to the preservation, study, and practice of Animistic Shamanism, with deep roots in the Wisdom Traditions of Indigenous Amazonian shamanism and East Asian animism.

Tamara lives and maintains her own practice in the Bay Area, weaving and bridging these traditional lineages together into a dynamic and transformative healing practice. Along with Chinese Medicine, her practice offers dietary and nutritional counseling, Zi Wei Polestar Chinese astrology readings, Qi Gong exercises, Daoist nei gong and meditation practices. Most significantly, her practice emphasizes individualized counseling, personal mentoring and teaching, depth work on cutting through ego from the dharma perspective, and comprehensive support on the holistic integration of the various aspects and dimensions of one’s life and experience throughout the healing process.

These seminars, and Tamara’s work in general, provide an on-going space of learning, dialogue, and cultivation in the understanding of our experience as human beings, the discovery of our natural condition from the non-dual perspective, and how we can incorporate all of these into being of benefit to the earth and all sentient beings.

Born in San Francisco and raised in Hawaii, Tamara has a love of cultural, linguistic and culinary diversity. She has trained in the martial arts forms of Wing Chun, both Chen and Yang style Tai Chi Chuan forms and various Qi Gong styles. She enjoys film, literature in all its myriad forms, meditation, writing, art, music, divination and dance. When not working she enjoys traveling, spiritual retreat and culinary exploration, reading/rereading/re-rereading the Yi Jing, whistling in the jungle, sparring blindfolded on stairways, and searching for the perfect bowl of noodles.